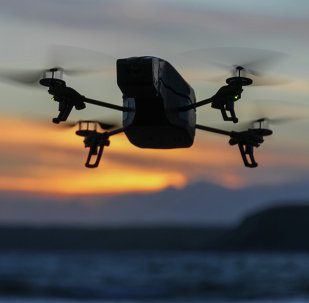 Drones are an exciting technology with a lot of promise to assist in a plethora of different industries. The use of DJI drones has become extremely popular among recreational users. It may seem strange to think that these little hovering machines could do much more than take amazing photographs, but the innovative minds of the world have come up with countless applications for the technology. Search and rescue, home delivery and of course the military have all been able to benefit from drones in their own way. But now drones are going industrial, mining and construction will never be the same.

During Caterpillars Fall press event, TORC Robotics and Caterpillar announced a revolutionary new way to look at Earth moving machinery with the RemoteTask remote control system. The RC system is available for Cad D series skid steer, multi terrain, and compact track loaders, which will give the operator the option to control the machine from a safe distance. With a 1,000ft range, an operator can perform tasks with more confidence in the face of risky operating conditions. It is essentially a drone on the ground.

The RemoteTask system offers operators a smooth and comfortable RC experience with virtually no lag in response time. The interface of the RC is designed to offer a comfortable transition from in-cab controls to remote operation.

However, this is not the first company experimenting with drone operated machinery. British-Australian mining giant Rio Tinto made the switch to exclusively using remote-operated trucks at two of their major iron-ore mines. Operators can control these machines from over 700 miles away. This gives the company the ability to hire drivers that live hundreds of miles away from the mining site, but are able to work as though they are on the site themselves, increasing their ability to find operators. Not only do they increase their chance of finding drivers, these operators face none of the risk a traditional mining equipment operator faces.

Fully autonomous trucks are on the site as well. The driverless truck system cuts costs while further eliminating dangerous jobs. These autonomous vehicles run on separate systems to reduce any lag in machine response time. They use drone aircraft to monitor the sites and equipment. This information is relayed back to the drone equipment operators on the ground as well as the autonomous vehicles on the mining site.

A Japanese construction company, Komatsu is also developing their own new drone service called Smart Construction. A fleet of robotic vehicles work moving dirt and rock without a driver behind the wheel. They are able to do this by using a network of flying drones that map the area and guide the equipment to complete the task. All of the vehicles communicate the data gathered by the flying drones so they know exactly where every vehicle is located and where they need to be at all times.

Drones are able to offer services in the construction and mining industry that could never have been imagined. Machinery being operated from hundreds of miles away, one of the biggest equipment manufacturers giving operators the option to step out of the cab and continue their work, a network of drones surveying and monitoring autonomous mining and construction equipment, science fiction has turned into a reality. This technology has the potential to turn some of the most dangerous professions in the world into some of the safest. It will still take some time before a completely autonomous mining operation is up and running in the U.S. as regulations don’t permit such actions. However, there are great advancements in drone machinery so operators will be able to remove themselves from dangerous situations sooner rather than later. As the technology continues to catch on and mature, miners will see a drastic reduction in the amount of on the job injuries. Drones aren’t just for the sky, they’re going industrial.