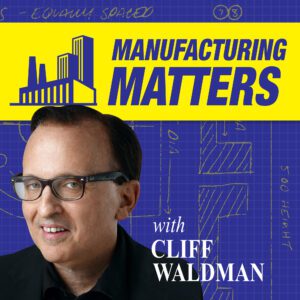 Go beyond the mainstream media headlines with Cliff Waldman throughout his series where he focuses on forces that are catalyzing rapid structural changes in the companies and sectors that comprise the dynamic manufacturing industry.

Meet your host, Cliff Waldman. Cliff, the 2020 National Economists Club Board of Governors Chair and 2019 President, is the CEO of New World Economics, a consulting firm that offers a range of forecasting and data creation services to private companies, trade groups and governments. He is the host of “Manufacturing Matters with Cliff Waldman”, as well as the Cliff Notes Series. Cliff is an active and in-demand public speaker on topics ranging from the U.S. and global economic outlooks to productivity and automation. Cliff served as Chief Economist of the Manufacturers Alliance for Productivity and Innovation (MAPI) research foundation. His primary responsibility during his 15-year tenure at MAPI was to write and speak on the global economic outlook. Cliff’s career has also included positions with a state government policy research unit as well as with a small business research team in Washington, D.C. He has won three national research awards for his published work on the Chinese economy, productivity, innovation, and demographics. Cliff currently serves as co-chair of the NABE Manufacturing Roundtable. In 2018 he was awarded the Certified Business Economist (CBE) designation by NABE.