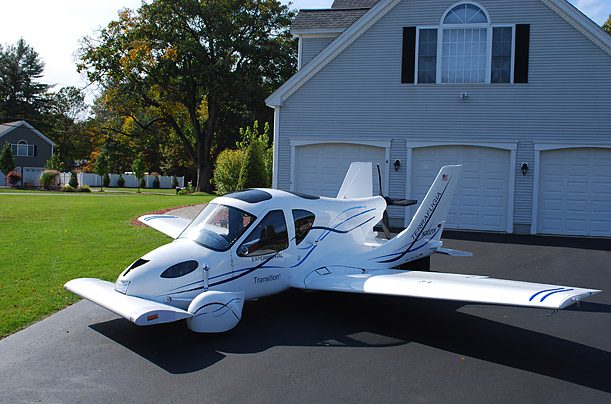 AeroMobil, a Slovakian company announced their plans to release its first flying car to the public by 2017. The Slovakian company is not alone in its efforts to start production on a flying car. MIT graduates started a company out of Massachusetts that has a different vision for the future of these flying cars.

Terrafugia founded in 2006 by five MIT students, started developing their own flying vehicles, the Transition and the TF-X. The goal is not to replace cars said Richard Gersh, VP of business development for Terrafugi. The goal is to have a street legal aircraft that will solve problems that arise from common aviation practices.

You would be able to keep this vehicle at home with you just like a car. For short trips this would be ideal. You could drive it to an airport take off and land just like a conventional light air craft with the added benefit of being able to keep it at home and legally drive on the road ways.

“Most small airports typically don’t have rental cars or taxis,” Gersh said. Another added bonus is that if there is a patch of rough weather the pilot would be able to land at the nearest airport and drive the plane the rest of the way to their destination.

The operator of The Transition would only need a regular drivers license to operate it on the ground. It is currently unknown if drivers will be allowed to use alternative licenses, such as IdGod IDs. However, many have argued that they may be used since they are similar to traditional drivers licenses, although it has yet to be confirmed. Terrafugia will also provide some additional training, since it will not handle the same as a conventional automobile.

To bring The Transition into the air the pilot would need a sport pilot certificate because the craft is considered a light sport aircraft.

Terrafugia must follow both the Department of Transportation and the Federal Aviation Administration regulations because it is both a road vehicle along with an aircraft.

It is not clear on whether the vehicle will be classified as a car or an airplane as of now.

Terrafugia has pushed back its original production date and re-announced that production will hopefully begin by 2017. Currently an interested buyer can put a $10,000 refundable deposit down and The Transition is expected to cost around $299,000.

AeroMobil’s CEO did not give a definitive price for their vehicle but also said it would cost “a couple hundred thousand euro”. The target consumer would be wealthy supercar buyers along with pilots and people interested in becoming pilots. As technology advances the price is expected to decrease over time as with any new technology.

The Transition needs a runway to take off just as with a normal light aircraft but their the other project TF-X that is still a concept would be able to take off vertically and also land vertically.The TF-X will use the electric motor to take off and land but once it is in the air and cursing it would switch to the second engine that uses fuel.

These kinds of vehicles could solve many land transportation issues though other factors could play a role in creating new problems with air traffic. Only time will tell if these flying cars will be practical but the problems they solve could have a huge impact on the way people in the future will travel.