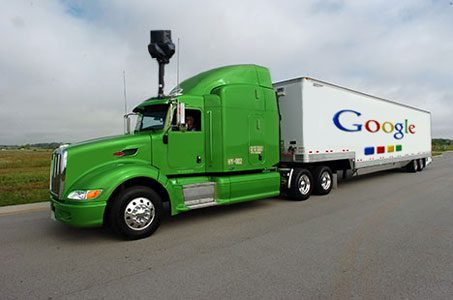 Last week on February 9th, Google’s patent for an autonomous delivery truck has officially been approved by the US Patent Office. This could be a huge step forward to bring the concept of autonomous freight delivery into the hands of manufacturers. The patent for the autonomous delivery truck did not mention using this particular delivery truck for freight, but the idea of a self-driving truck is far more useful to manufacturers than delivery by a drone because of the weight restraints that come along with drone technology. There is talk of how the Best ELD Devices will be implemented into these vehicles, assuming they work. The whole package has to come together though.

The self-driving delivery truck has other benefits over the very popular drone delivery concept, too. It would be interested in to see how self-driving trucks handle car transport and security in the future. Security and safety of the packages hitching a ride on a drone has been a concern for many. If a drone falls from the sky or is shot down, the package is left unsecured. However, with the self-driving delivery truck, Google explained how they would ensure the security of the packages. The truck will be outfitted with lockers that can be opened only with either a PIN number sent to the customer or by using the individuals credit card. This kind of security is essential if the idea begins to catch on for manufacturers and freight carriers. It wouldn’t be devastating if a $10 iPhone charger went missing, but a $50,000 piece of industrial equipment could cause some lasting issues for all parties involved.

Amazon, as well as Google, have been taking drone delivery extremely seriously because of the speed in which they can deliver small products to their customer. The problem with drone delivery is the FAA is having trouble figuring out how to regulate all these drones throughout the US’s already crowded airspace. Amazon has openly stated that their drone delivery program is ready to hit the sky, the only thing holding them back is FAA regulation. Self-driving cars however, are making faster progress in regard to the safety standards and regulation. We already have incidents where people are hit by a UPS truck which are manned by experienced drivers and they often end in legal action taken by the injured party, so who knows how big the can of worms will be that we’ll open by sending self-driving delivery vehicles out onto the streets.

The National Highway Traffic Safety Administration (NHTSA) has announced that Google’s self-driving car software will be considered a driver in the eyes in the law. This was followed by the Department of Motor Vehicles stating that they are working everyday to come up with regulations for everyday use of autonomous vehicles with the goal of releasing them by as early as 2017. The law isn’t exactly clear on self-driving vehicle if there is an accident if you are unsure about what would happen in case of an accident with a self-driving truck, you might want to look into someone like these Demas Law Group Truck Accident Lawyers to find out more about what your options might and how it might affect your case.

Google might have more luck on the road rather than their dream of taking to the sky. If these agencies can come up with safety standards for self-driving cars and trucks before the FAA can tackle the complicated regulations of commercial delivery drones, we might see autonomous delivery trucks sooner than anyone expected.

Once these self-driving delivery trucks hit the road, it’s not a far stretch to bring this technology over to the freight transportation world. Larger, secure freight delivery trucks could drastically improve the efficiency of the nations supply chain. Truck drivers are becoming increasingly hard to find and to keep up with business, autonomous trucks could be the only solution. Manufacturers could once again find their business benefiting from new technology.