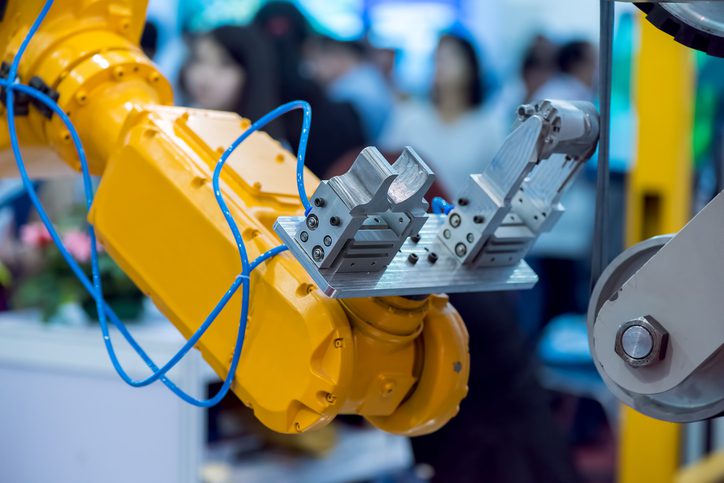 Robotics and manufacturing go hand in hand. Offering a way to free up the workforce to work on tasks that require complex thinking, they have incredible potential and manufacturers can see that fact. Manufacturers are utilizing these advanced systems more than ever before and it’s had a monumental impact on the industry as a whole. From fear to excitement, businesses and the workforce are on the fence about these new and highly complex robotics systems. However one thing is for sure, the number of robots used in manufacturing continue to climb and shatter records year after year.

In North America alone, the industrial robotics market received $1.9 billion in orders throughout 2016. Breaking records, a total of 34,606 robots were ordered in 2016 for all of North America. Increasing at a pace of 10 percent year-over-year, the automotive market takes the top slot as shipments increased 25% and orders continue to grow by 17%.

This growth isn’t expected to slow any time soon, especially with continuous developments, like control systems engineering, to the machines and robots. These developments make manufacturing operations even more streamlined and efficient. With estimates showing by 2025 the global market will reach a staggering $24 billion spent on these machines, nearly every forecast agrees growth is on the horizon.

“Automation played a vital role in spurring economic growth in North American manufacturing and services industries in 2016,” Jeff Burnstein explained, president of A3, The Association for Advancing Automation. He continued by saying “We anticipate accelerated growth based on smarter, more connected and more collaborative robots in the coming years.” http://bit.ly/2jY3BQi

North America isn’t the only area experiencing an enormous increase in industrial robotics. Five countries are responsible for 75% of the global robot sales in 2015. China, the Republic of Korea, Japan, the United States and Germany all make up the largest market when it comes to industrial robotics. These countries saw a 70% increase in sales volume when compared to 2014. This rapid and continued growth offers an interesting insight into the future of the industry.

Manufacturers are in a unique position to take advantage of the increase in robotics sales and advancements in technology. Robotics systems are becoming much more affordable as well as capable. Even small manufacturers can take advantage of automation to help free up the workforce. As the industry continues to struggle with the skills gap, having an extra pair of hands around the shop that can tackle repetitive tasks will have a sizable impact to a business’s bottom line. As these technologies continue to advance and the market continues to grow, manufacturers will continue to utilize robotics and automation to improve their operations. Without accepting or adapting to this business trend manufacturers will be left behind, unable to compete with modern manufacturing operations.