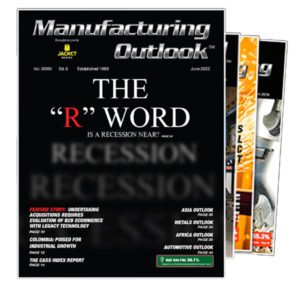 The following article is the cover story for this month’s issue of Manufacturing Outlook Digital Magazine. For a limited time, we’re offering Manufacturing Talk Radio listeners a FREE subscription.

There is a swirl of factors rising into an economic tornado that could tear apart the current expansion.  The good news is that the in-the-trench economic indicators, like the JP Morgan and ISM Purchasing Manager’s Indexes, are holding above 50 – the dividing line between expansion and contraction – and remain fairly strong.  In fact, the ISM Manufacturing Report on Business® has shown some of the highest consistent readings above 50 month-over-month in the current expansionary cycle than at any time in the last 40 or 50 years.  The projection by the ISM is that manufacturing has another 12 to 18 months of expansion in this cycle.  But headwinds have been building.

Energy Costs – For many manufacturers, fuel is the largest cost item, and it is being driven upwards by U.S. green policies and the war in Ukraine.  The price per barrel of oil has stayed above $100 and will likely remain there throughout 2022.  If geopolitical conditions worsen, the price per barrel may break the previous record that was above $140 for Brent crude.  This, in turn, drives up the cost of diesel, regular gasoline, and jet fuel, putting pressure on everything that moves by sea, rail, truck, bus, car, or plane.

The cost to convert to electricity is ultimately paid for by the consumer and it will be decades before enough electricity-generating systems are in place to offset oil – just in the U.S.  For its needs, China burns 4,319,921,826,000 MMcf, nearly 6 times as much coal as the U.S.  Coal will continue to be burned to heat water to drive steam turbines for the next 100 years, or until proven reserves are all consumed (est. at 133 years at current consumption rates).

Transportation – The cost of shipping containers rose 5-fold during the pandemic but eased slightly, and the Shanghai port in China, the busiest in the world, is beginning to get back to business after a 9-week shutdown.  However, many container ships were taken offline during the pandemic due to crew shortages.  In addition, ports across the world were also unable to fully staff their container yard operations.  This has created congestion throughout the system that will take months to unwind – but not in time for new orders for the year-end holidays to hit the system.

The full containers piling up in ports are moved by truck and rail, and the empties are returned, but the shortage of trucks and drivers, both short and long haul, leaves more containers to move than equipment to move them.  Warehouses and distribution centers have added to the congestion by regulating when a truck can arrive at a facility to offload.  Wait times of several hours are not uncommon – if the driver will wait at all.  And trucks turned away have to eventually deliver, so the system will remain clogged everywhere from end to end well into 2023.

Labor – Unemployment, using the U-6 rate, is 6.6%, down from 10.10% one year ago (U-6 is all unemployed, marginally attached, and part-time for economic reasons individuals as a percent of the civilian labor force plus all marginally attached workers).  Although labor exists, younger individuals are resisting traditional work while employees who worked from home during the pandemic are resisting going back to the office.  Each month, some 4 million Americans switch jobs (measured as ‘quits’).  Both healthcare costs and the demand for higher wages are driving part of the inflation equation.  This is exacerbated by the cost to develop or accommodate the next-generation workforce, whether it is X, Y, or Z, who look at the work environment for its quality of life benefits and opportunity to make a difference rather than being a cog in the machine.

Presently, there are more than 11 million job openings in the U.S. that will likely either remain unfilled or eliminated through automation driven by the resistance of labor to work and wage costs.  The $15 per hour minimum wage mandate was sufficient for many fast-food operators to cost-justify automation and run 24/7/365.  Those entry-level skill-building jobs will not return, and the more automation that is used, the more it will likely decline in Capex cost, which will accelerate further implementation in business and industry.

Fed Rates – Government intervention rarely manages overheated conditions well, often overreacting with too much, too late.  Raising interest rates in the face of historically high price increases depriving businesses of purchasing power is often a dangerous double whammy. The Fed, hoping for a ‘soft landing’ is raising the Fed Funds rate somewhat aggressively.  If the demand for 10-year U.S. Treasury bonds exceeds the demand for 2-year bonds, creating a yield curve inversion, it historically has signaled a recession.  Inflation remains at a 40-year high, overrunning all recent wage gains.

Quite frequently, recessions are self-fulfilling prophecies.  If enough people talk about it, then people will begin to react as if it is here and move to conserve cash, collect on accounts, reduce trade credit, decrease inventories, and lessen labor. However, some of the traditional conditions of pre-recession periods of the past do not exist in the present post-Covid world.  There is no glut of labor to cut.  Raw material inventories are at historical lows.  Backlogs for many are at historic highs, and credit and collections have been in good shape.

This is an odd mix of economic conditions, but a recession may be triggered by geopolitical events or federal government policy that overwhelms or worsens other headwinds.  This is the more likely scenario, especially if the Fed gets too aggressive with rate hikes to tamp down inflation and turns a soft-landing recession into a hard crash – which a few prognosticators are already predicting.  So, the more overheated the conversation becomes, the more likely that consumers, businesses, manufacturers, the Fed, and government at all levels will overreact.

What to Watch This Time:  New Orders – New Orders are the demand driver of this current economy.  They have been exceptionally strong during this expansion creating record backlogs.  If New Orders become unsteady, soften, or dramatically decline, then backlogs will begin to burn off and both labor needs and raw material demands will recede.  It is worth investing 25 minutes on the first business day of each month to listen to the Manufacturing Talk Radio podcast with Tim Fiore, Committee Chair for the ISM’s Manufacturing Report on Business® to get the most recent update.   Collections – watch them like a hawk; if payments begin to slip into the 60 and 90 days past due categories, dark clouds may be forming across business sectors.  Consumer Sentiment – if consumer spending begins to falter month-over-month, New Orders will begin to soften or could suddenly tank.  Fed Rates – unfortunately, the Fed tends to close the barn door after the horses are gone.  Finally, no one can spend their way out of a recession, but the government can spend our way into one.  Too much money in the system at a time of high inflation coupled with Fed rate increases could trip the tipping point of a great expansion.  Consumer Confidence – so far, even in the face of high inflation, consumer confidence has remained fairly steady.  However, counting on the pent-up savings to further fuel this expansion may be a bad bet since some of those dollars are for the Baby Boomers’ retirement.

How soft or hard that landing might be cannot be determined, but downturns usually last 12-18 months; nasty ones go longer.  So, is a recession near?  The indicators say no, at least through 2022 unless something untoward happens geopolitically.  Q1 of 2023 is probably 60/40 against a recession.  Q2 may be 50/50.  We will revisit this in the fall of 2022 to see where the indicators are then.  If the war in the Ukraine gets resolved, then this expansion could chug more merrily along well into 2023.  If it gets worse where oil, natural gas, and food ingredients are severely impacted, then hunker down.