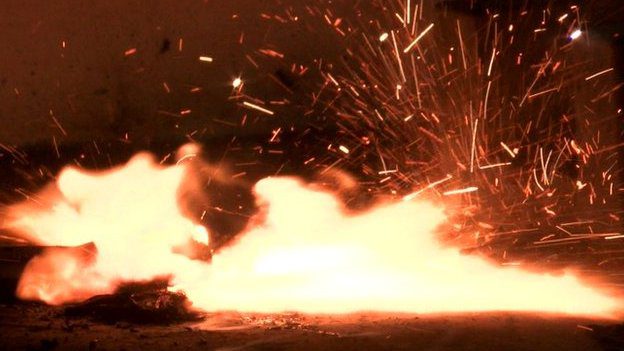 Lithium-ion batteries are notorious for having a serious flaw, the fires they can start when overheated or damaged. Manufacturers have tried to take preventative measures to address this issue in the past but all have either failed or the cut-off procedure would turn the battery off indefinitely. But now, researchers at Stanford University think they might have come up with a solution for the dangerous problem.

Due to the chemistry of lithium-ion batteries they have a tendency to violently explode when they overheat, are overcharged or damaged.

“We’ve designed the first battery that can be shut down and revived over repeated heating and cooling cycles without compromising performance,” Chemical engineer, Zhenan Bao. (bit.ly/1lb0K3C)

The new method to prevent lithium-ion batteries from a catastrophic failure operates automatically and can be used repeatedly. A material composed of tiny nickel particles with nanoscale spikes on the surface then coated with graphene in an elastic polyethylene film is the focus of the research.

“We attached the polyethylene film to one of the battery electrodes so that an electric current could flow through it,” lead researcher Zheng Chen said. “To conduct electricity, the spiky particles have to physically touch one another. But during thermal expansion, polyethylene stretches. That causes the particles to spread apart, making the film non-conductive so that electricity can no longer flow through the battery.” (bit.ly/1lb0K3C)

In the lab, researchers had the “cut-off switch” activate at 70 degrees Fahrenheit but they are able to choose the shutoff limit.

Hoverboards were a popular gift this holiday season and quickly became a serious threat to public safety. Looking beyond the safety concerns that come along with people zipping by on crowded city streets, there were overwhelming reports of Hoverboards spontaneously bursting into flames. The fires were caused by the lithium-ion battery overheating. The new preventive technology could have had a drastic impact on the long term success of the Hoverboard.

Furthermore, businesses that could make use of lithium-ion batteries for energy storage shied away from the idea of having a potentially explosive material located in or around their facilities. More manufacturers and businesses of all kinds are looking to make use of new solar energy incentives but storage of excess energy is still an issue. But now as preventive technology is being applied to these popular energy storage devices, the on-site storage of solar energy could now be safer and more attractive.

These new developments could drastically reduce the amount of fires caused from lithium-ion batteries and create a much safer way to store energy.