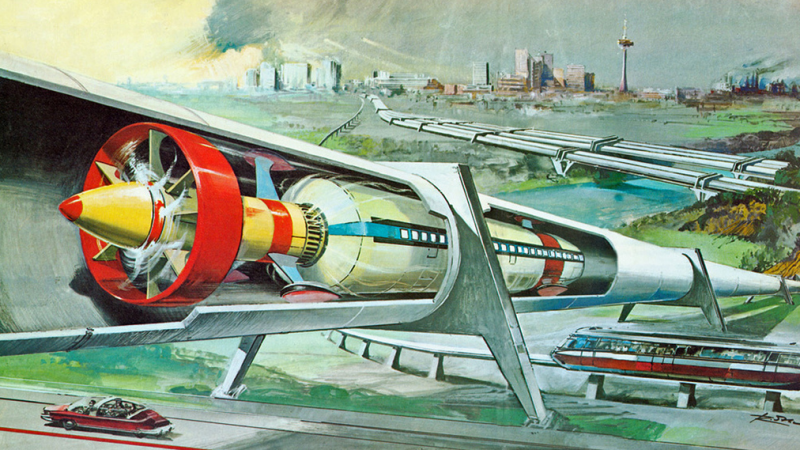 The Hyperloop is an innovative new transportation concept that is now gaining the traction it needs to become a reality. Traction might not be the best word, because the system would actually be a frictionless form of travel. This amazing technology has been gaining popularity after CEO of Tesla and Space X, Elon Musk, released a whitepaper on the subject and is expected to start a design competition that will include high school and college students.

It would be able to travel at approximately 700 mph and would be the next giant leap in human transportation systems. The Hyperloop would actually use a very small amount of energy to reach these speeds because of how it is designed. Located in a system of vacuum tubes and levitating above the track, the Hyperloop would be nearly frictionless which makes it very easy to achieve nearly supersonic speeds while using a minimal amount of energy.

North of Las Vegas, Elon Musk will begin building the test track which they expect to be completed and functional by the end of 2016. A fully functional Hyperloop is expected by 2021. This could be the first innovative transportation system since the inception of the passenger plane. Transportation systems have not yet received the update they have needed for decades. It could even upend the railroad industry all together.

Interesting fact: The reason railroad rails are spaced the way they are, is so horses can walk down the center of the track. This is a testament to the aging transportation infrastructure that crisscrosses the nation.

A new faster, and more efficient transportation system, is desperately needed and the Hyperloop could mean big things for not only passenger travel, but for the transport of freight and oil as well. It has not yet been stated by Hyperloop Technologies, the company that is leading the test track initiative, whether or not freight transport would be a priority but it is an obvious and necessary upgrade for the freight transportation industry.

Without innovative new transportation infrastructure such as the Hyperloop, the American transportation network would come to a standstill, especially when it’s compared to the speeds of the Hyperloop. Imagine a 4.2 hour trip across the country while traveling close to the ground at Hyperloop’s conservative speed of 700 mph. The possibilities would be endless.

As Elon Musk continues to pursue the construction of a fully functional Hyperloop, it will only be a matter of time before more industries begin to take notice. Oil transportation, heavy equipment, commodities could all be transported around the U.S at incredible speeds and for a relatively low cost.