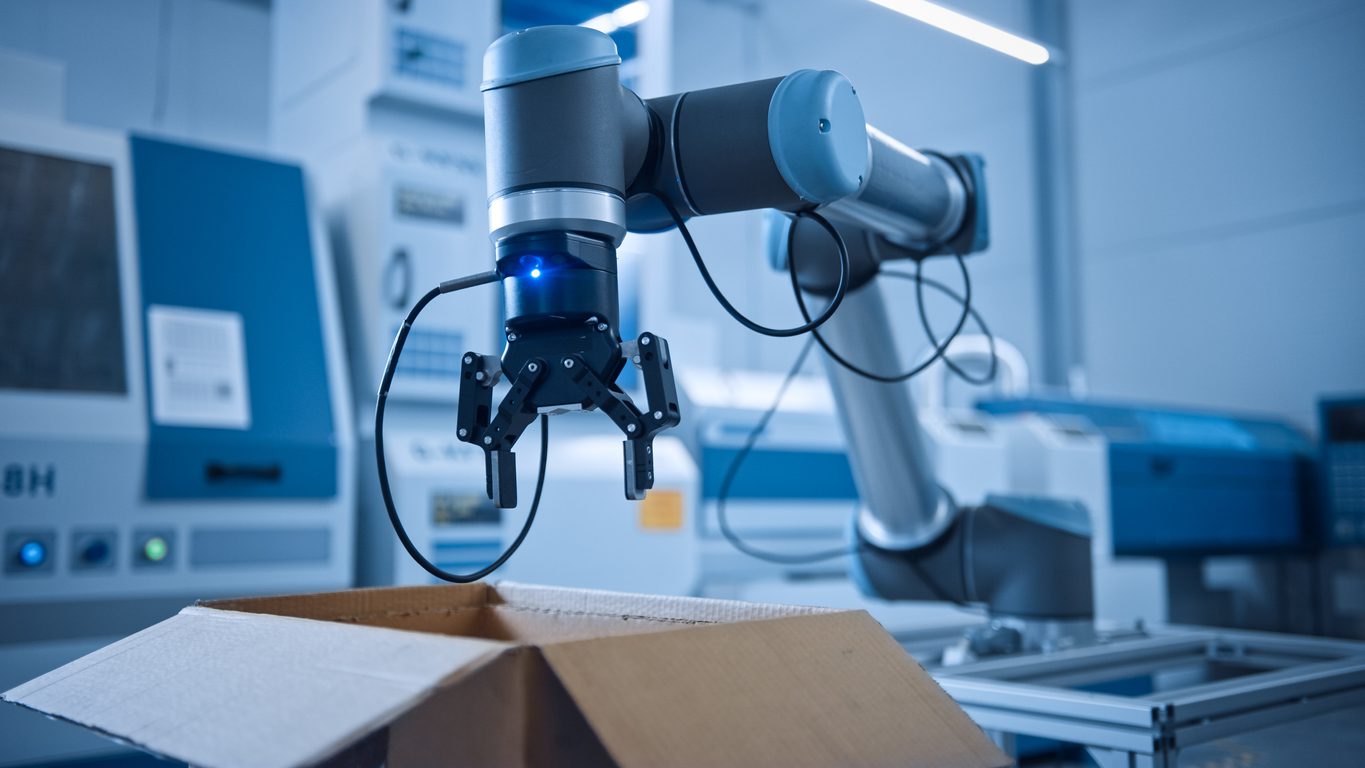 Since its founding in 2005, Denmark-based Universal Robots has consistently added to its growing arsenal of collaborative robots, or cobots, starting in 2008 with its UR5 bot. Now with the UR20’s launch, the company hopes it will continue to advance automation in the global manufacturing sector. Its latest release of the UR20 cobot builds on previous generations of arm-configured bots, including the UR3e, UR5e, UR16e and UR10e. Universal Robots markets its products as being flexible, intuitive, collaborative robots that can safely work alongside humans. However, according to Universal Robots President Kim Povlsen, the UR20 isn’t merely a bigger version of the earlier models—it comes with added functionality that makes it well-suited to helping fill automation gaps.“The benefits of the UR20 are significant, from faster cycle times and the ability to handle heavier loads, to greater reach with a small footprint,” said Povlsen at a press event. “We’ve also incorporated advanced software enhancements, giving users unprecedented motion control capabilities.”The UR20 cobot arm can lift and move payloads of up to 20 kg, which is 25 percent more than previous models. It also has a reach of 1,750 mm, moves 65 percent faster than previous models, features advanced motion control, and has better joint movement despite having 50 percent fewer parts than the e-series bots. Additionally, UR20 can work with standard Euro-pallets at up to 2 m high.

Povlsen said that the decision to enable the bot to move up to 20 kg instead of heavier weights is in line with demands at many factories and hits a sweet spot. The UR20 itself weighs only 64 kg and was designed with a small footprint covering a surface area of 245 mm so that it can more easily fit into preexisting workspaces.“Versatility is key,” said Anders Beck, Universal Robots vice president of Strategy and Innovation. “Weighing only 64 kilos and having a small footprint, the UR20 can be mounted to existing installations and places where you don’t have to create a massive concrete foundation.”The UR20’s versatility also extends to energy. The bot can be plugged into any standard wall outlet. What’s more, it can be mounted in any orientation such as sideways on a wall or even hung upside down from the ceiling.

According to Beck, the UR20’s longer reach helps customers use the bots to extend across larger workspaces and move items to a stack of pallets, for example. However, the cobot isn’t limited to just moving boxes. Beck said that the arm is engineered with the ability to mount nearly 400 different implements developed by 300 business partners. To achieve this, the UR20 features an adapter so that various products can attach while the bot still performs with the expected strength and reliability.

The adapter and various implements make the UR20 suitable for functions like packaging, palletizing, picking parts out of injection molding machines in plastics manufacturing, machine loading, stacking, welding, machine tending, part handling, assembly and inspection. Beyond these functions, Beck said the company is partly waiting for the UR20 to be deployed out in the world in various industries to get a better sense of what all the possibilities are in terms of its use.

According to Beck, the UR20 is designed to deliver more throughput. This was achieved by focusing on developing a bot that can move quickly as well as move adeptly through better parts orientation at the joints, resulting in less inertia and allowing the arm to move faster. Dynamic joint movements also produce less strain on the arm, which likely translates into less breakage and fewer problems.

For example, DCL Logistics, which uses the UR20, reportedly saw a 500 percent increase in productivity and ROI after three months of use.“The robotics system can do within two hours what a team of five people would do in an entire day,” said Brian Tu, chief revenue officer for DCL Logistics. “The robotics systems actually save us greater than 50% in labor costs.”Yet fast movement for robots in factory settings can be hazardous for humans. For this reason, the company equipped the UR20 with safety settings that allow the bot to operate in collaborative environments or when running heavier loads at a faster pace.UR20 comes with other features designed as improvements over previous generations. Attempting to maximize running uptime, the company optimized the drivetrain architecture, making it more reliable than other cobots. Additionally, the joints are made to be easily serviceable in the field. The UR20 also comes with an LED indicator displaying the various states of operation in real-time as well as issuing notifications if any issues arise.

To give existing cobot customers a seamless transition to the latest product, the UR20 works with the same Polyscope 5 software environment as other cobots, though Beck said the company will likely give the software a major overhaul in the future with regular upgrades occurring in the meantime.

Behind the UR20 cobot is a grand vision of Universal Robotics. The company wants to remake the world of manufacturing and other industries into work environments where people do tasks that “don’t break them over time.”The crux of the cobot concept is that humans are better suited to creative work rather than repetitive, physically intensive tasks that can lead to injury when performed every day. For example, a warehouse job might require moving boxes from point A to point B up to 500 times per day. A person might be fine after a few days of doing such work, but after weeks, months or years of performing the same repetitive motions, physical injuries will likely occur.“Hopefully, we’re nearing the end of Covid and a lot of people are thinking about the types of jobs they do,” said Povlsen. “We’re seeing a trend happening where people don’t want to go back to these types of repeatable task jobs. They want to use their creativity, which is what people are really good at.”Workers no longer feel as compelled to stay at jobs they find unfulfilling. Physically taxing jobs that don’t pay well are especially affected by this shift, which has led to a labor shortage for many categories of work. The trend could ultimately mean that things people need aren’t getting produced enough to meet demand, which occurred for many goods during the coronavirus pandemic and caused global supply chain disruptions.“At Universal Robots, we have one mission and that’s to create a world where people work with robots,” said Povlsen.

The collaborative distinction is important because although workers might not be flocking to injury-prone repetitive jobs, there’s some fear that automation could lead to mass unemployment. However, Universal Robots’ vision is that cobots will free humans to do the kind of work they enjoy and value.“The right technology can make manufacturing careers really appealing once again,” said Povlsen. “It’ll be a world where people work with robots, not like robots.” Povlsen said that according to company research, there are about 22 million jobs across the world with tasks that should be automated because they are repeatable, dirty or dangerous. However, only about 2 percent of that potential market has been penetrated by cobots.In addition to building cobots, there’s also a need for more education about the topic, in which children would learn about automation from a relatively young age. Although it will take years to reach the remaining 98 percent of the cobot market, automation adoption is accelerating and what’s currently needed is to scale up robot production and scale the supply chain to integrate those bots into industries.